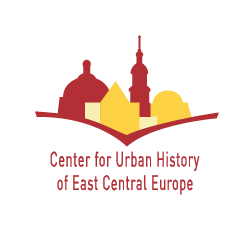 The Center for Urban History of East Central Europe (Lviv, Ukraine) is a non-profit and non-government research and public history institute. Its work is structured around its three focuses: urban history research, digital history projects, and public history activities. Research projects of the Center are realized by the team of historians, sociologists, and historians of architecture. Digital history projects include “Urban Media Archive” that develops a digital collection on urban history of the region, and “Lviv Interactive” – an urban digital encyclopaedia that focuses on the city of Lviv. Key activities of the public history program are exhibitions realized in different formats and venues. Exhibition lecture programs are developed for selected exhibitions, as are accompanying programs for kids and youth. Specific lecture and discussion series are designed to offer possibilities for broader discussions. The Center also engages in projects that aim at developing new urban spaces that fulfil public, memorial, and educational roles in the life of contemporary city.

Sofia Dyak, PhD, is a director of the Center for Urban History of East Central Europe in Lviv (Ukraine). Before taking the position of director, she was involved in developing and realizing research projects, exhibitions, workshops, and summer programs dealing with preservation and oral history in western Ukraine, a region often described as borderland and known for its diversity before the Second World War. Dr Dyak studied at the doctoral program at the Institute of Philosophy and Sociology of the Polish Academy of Sciences (Warsaw) and there defended her PhD thesis “(Re)imagined Cityscapes: Lviv and Wroclaw after 1944/45.” She has graduated from the MA program at the History Department at the Central European University (Budapest) and holds her BA from History Department of Lviv University. Her research interests include post-war history of border cities, heritage and urban planning in post-catastrophic cities, as well as city branding. Dr. Dyak was a fellow at the Center for Holocaust and Genocide Studies in Amsterdam, the Institute for Human Sciences in Vienna, the Historical Dialogue and Accountability Program at Columbia University and Shklar Fellow at the Harvard Ukrainian Research Institute.

Taras Nazaruk, MA, is a manager of the “Lviv Interactive” project of the Center for Urban History of the East Central Europe. He obtained a Master’s degree in Communication Design at the University of Wroclaw (Poland) and a Bachelor’s degree in Journalism from the I. Franko National University of Lviv. As a Erasmus Program member he studied at the Masaryk University (Brno, Czech Republic), where he studied cultural anthropology and social media. He worked in a range of Internet projects: 24tv.ua, “Telekrytyka,” and the web site for Credit Suisse. He was a joint author of the “Verify” project http://verify.org.ua/en/ His areas of interest include: new media, digital humanities, and communication design. At the Center for Urban History, from August 2016 he has been working on coordinating the project “Lviv Interactive” – the digital encyclopedia of the city and its past (from XIX century till present) aimed at research and representation of the city through the objects and spaces, see https://lia.lvivcenter.org/#!/map/ At the moment the database of the project includes more than 1,000 entries on architecture, institutions, and personalities of Lviv.

Iryna Sklokina, PhD, is a historian and research associate at the Center for Urban History. In 2008-2015 she worked as research associate at Kharkiv National University and the Kowalsky Eastern Institute of Ukrainian Studies (Kharkiv, Ukraine). Participant of several international projects about historical memory and oral history, including “Region, Nation and Beyond: An Interdisciplinary and Transcultural Reconceptualization of Ukraine” (supported by the University of St.Gallen, Switzerland, 2012-2014), and “Rethinking the Soviet Memory of the “Great Patriotic War“ from the Local Perspective: Stalinism and the Thaw 1945-1965” (collaborative research project focused on 3 cities in Russia, Ukraine, and Belarus, supported by Geschichtswerkstatt Europa, 2011 – 2012). In 2012 she had an internship at the University of Toronto (Centre for European, Russian and Eurasian Studies). At the Center for Urban History Iryna Sklokina researches historical heritage, in particular industrial and Soviet heritage in Kharkiv and Lviv. Also, in cooperation with the Kowalsky Institute Iryna prepares a book on Donbas company towns and specifically on dealing with their heritage in contemporary Ukraine. Her research interests include Soviet and post-Soviet politics of memory, historical heritage, museum studies, and oral history.

← Eurodite Platoniq →
We use cookies on our website to give you the most relevant experience by remembering your preferences and repeat visits. By clicking “Accept All”, you consent to the use of ALL the cookies. However, you may visit "Cookie Settings" to provide a controlled consent.
Cookie SettingsAccept All
Manage consent