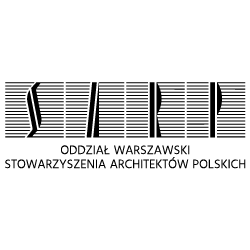 OW SARP is a non-profit, voluntary professional organization associating architects, economists and other specialists in the field of architecture and urban planning. With more than 125 years of history SARP has been a promoter of good practices, high quality, and outstanding value in architecture. The Warsaw Branch (OW) of SARP is involved in all types of urban development and regeneration projects in Warsaw and Mazovia region.
OW has about 1,000 members, including most prominent and awarded Polish architects. It has also broad and fruitful experience in cooperation with specialists from various urban fields, including acknowledged experts in urban economics and sociology. In last few years OW has been very active in several projects regarding the revitalization and heritage, urban strategies and plans for Warsaw municipality. One of the most important goals of OW is to strengthen public participation and inclusion of local societies in creating the urban environment. OW is promoting the models of cooperation between municipality and interest groups like NGOS and local entrepreneurs, as well as good practices in participative urban design. http://sarp.warszawa.pl/about-us/

Ms Katarzyna Sadowy, MSc in Architecture and Urban Planning (Faculty of Architecture, Warsaw University of Technology), PhD in Economics (Warsaw School of Economics), is an assistant professor in Warsaw School of Economics, author of numerous peer reviewed papers and monograph chapters. Combines academic career with practice in the field. Her experience as an architect practicing for several years gives her a valuable insight into tangible aspects of urban studies. In economics she is interested in emerging form of entrepreneurship and cooperation between public and private sector and NGOs. Since 2013 she has been involved in projects of Polish Architects Association Warsaw Branch (OWSARP) where she was Treasurer vice President from 2015 to 2017. Dr Sadowy is main co-author of the OW SARP`s recommendations for the revitalisation of Praga Północ district (2013) which were included into Integrated Revitalization Programme for the years 2014 – 2022, main co-author of the Warsaw Local Centres Programme (development of the network of urban subcentres, started in 2015) and main co-author of the recommendations for urban policies in Wola District (heritage area under a new development). She acts as a member of the Advising Board for Innovative Policies for the Mayor of City of Warsaw (since 2016), member of City Architectural and Urban Council (for the tenure 2016 – 2019) and member of Warsaw Roundtable for Climate Adaptation, WOSAK (2016 -2017). She was also involved in advisory services for the City of Warsaw in works on “Revitalization – Common Cause” project (Praga Północ area).

Ms Dominika P. Brodowicz holds a PhD degree from School of Spatial Planning, College of Engineering & Built Environment from Dublin Institute of Technology (DIT). Since 2014 she works as an Assistant Professor at Innovative City Department, Warsaw School of Economics. Her research and working experience concerns projects from the field of sustainable development, urban regeneration, green and smart cities, real estate market. D. P. Brodowicz is an author, co-author and participants on numerous research projects including “Eco-innovations in Cities” project focused on green and smart solution for urban areas funded by the National Centre for Research and Development in the frame of European Union Social Fund (2014-2015) and “SATRUN” project on urban regeneration conducted by Warsaw School of Economics, Edinburgh World Heritage (UK) and Central European Institute of Technology Alanova (Austria) from Leonardo da Vinci grant (2012-2014). Currently Dominika is involved in advisory services for the City of Warsaw in works on “Warsaw 2030” strategy and “Revitalization – Common Cause” project (Praga Północ area).

Mr Maciej Czeredys, MSc in Architecture and Urban Planning (Faculty of Architecture, Warsaw University of Technology) is an experienced architect in the field of heritage projects. Currently, since June 2016, is a Deputy Director for Investment for Sinfonia Varsovia Center, new seat for one of the most celebrated Polish orchestras, located in a heritage site in Praga Południe. Previously he worked in a similar position for new seat of Nowy Teatr (theatre directed by Krzysztof Warlikowski) in a historic building in Warsaw. Co-author of several zoning plans in Warsaw, including heritage areas, advising expert for heritage projects in Warsaw and Cracow. In 2003-2006 head of the Department of Register of Historic Monuments in Regional Agency for Historic Monuments in Mazovia Voivodeship, in 2006-2007 acting head of the Regional Agency for Historic Monuments in Mazovia Voivodeship. Apart from professional career, Mr Czeredys has been for many years actively cooperating with NGOs involved in Warsaw architecture and architectural and urban heritage, e.g. temporary urban projects and public debates organized by Bęc Zmiana Foundation, Foundation of Architecture and Society for the Preservation of Historical Monuments.