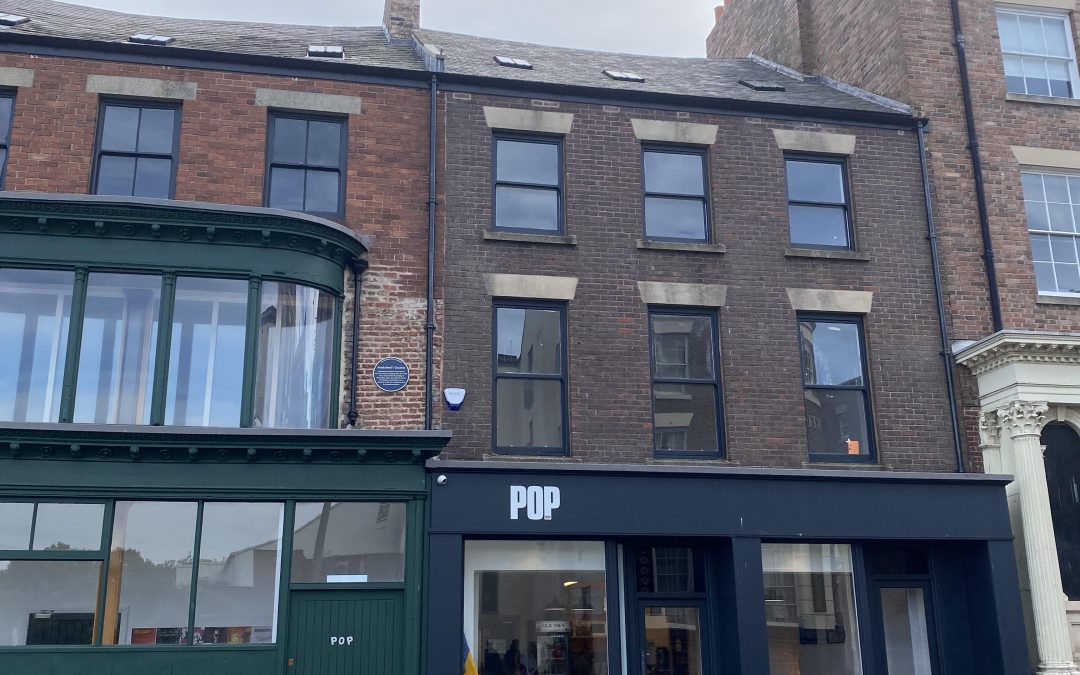 Check out the blog post by the artist Kitty McKay, in which she shares her reflections from the knowledge exchange workshop organised by the OpenHeritage partners in the Sunderland Lab (UK). If you want to see the original article, please click here.

How do we disrupt and counteract power imbalances, policies, and decision making processes? How can we support adaptive reuse for culture towards sustainability?

Practicalities first, just to iron out my brain a bit. Going to Pop Recs was great (though I wish I knew there was a tab for coffee before splashing out a really expensive flat white on arrival). It’s a really exciting space and the food was nice!! As a disabled person, the space felt accessible with clear signage and an atmosphere where needs could be communicated. Staff were lush and accommodating. Great loos – in the same way we’ve broadly come to realise we can’t use venues without step-free access, I think we need to move beyond spaces with gendered toilets.

Too often, the venues used for these kinds of events feel like classrooms or clinics or Premier Inns so being able to ease into an airy, creative environment made me feel less surveilled and out of place, especially as we talked about making and keeping space, making a case for disruption and counteraction of power imbalances within. This space reflected back the possibilities of our work.

On our table, there was a clear division between folks I’ll term as ‘space-bureaucrats’ and ‘space-users’. I think I am a ‘space-user’ and, despite wanting to know more about how and where and why to acquire space for grassroots / DIY arts work, I, as an artist and the grassroots rep in attendance, am a user of the space that the ‘space-bureaucrats’ were talking about acquiring, building, making and keeping.

They were so much louder and used a lot of language I didn’t understand and when I did try and talk about being a ‘space-user’ they seemed to be unable to properly listen. The question posed in Ashley’s email asked – How do we connect, collaborate, learn, and listen with others? – fell away a bit. I thought that perhaps groups could’ve been curated or arranged to give a better mix of people from different disciplines and backgrounds, with different experiences to offer to make it feel a bit more like an exchange (though I am unconvinced because over-organising groups could veer us back into the classroom we managed to escape with the venue choice….). Or we need some sessions on breaking apart some of the alienating language – or we could build a glossary to democratise the access to what feels like gate kept knowledge.

Across the day, something I felt came up a lot was ‘civic pride’. It entered the conversation initially with Martin talking about how and if civic pride can be measured, specifically how space or developments within a local context are received by users and dwellers: if people ‘identify’ with something; if people see themselves in something. We talked about the near-impossibility of measuring civic pride with the languages and matrices that developers and councils use. I’m still formulating what my matrix for measuring pride would look like, or if it’s necessary, for if we can’t easily represent or measure civic pride, does it make it less susceptible to co-option, exploitation or monetisation by the forces we aim to disrupt?

I’ve forgotten their name but the person involved in setting up Pop Recs with ginger hair talked about being proud of the space; proud of Pop Recs within the context of Sunderland and being excited for how it might be used by people in the area. They talked about their mum being proud and the pride they had in being able to offer the space free of charge to groups who mightn’t be able to afford it, or open it up for socially good activities to happen outside or beyond a capitalist value system. Martin talked about Sunderland’s bid for City of Culture too – a certified badge of civic pride – and Pop Recs’ development was part of that bid in a way. Pop Recs seemed to be part of an ecosystem in the area that lots of different people used and saw as useful, and took pride in.

Then I thought about this in relation to Dan and ReadingRoom. Does or can ReadingRoom inspire a sense of civic pride for folks living locally, shopping on that high street, using that part of the city in the same way people might identify with Pop Recs? When I roundabout asked if Dan thought local people felt any pride, he said “I think people are just glad the space is being used.” And I felt, as we chatted to Dan about the project and the free labour he was putting in with Harley (and the artists), a bit pessimistic about being able to cultivate sustainable sense of pride, when the gallery will inevitably be transient, due to lack of time, money and energy from those who put into it. And it’ll probably enforce an assumption of meanwhile-artist-space as temporary, fleeting, flighty and un-embedded. And because some can only do the free work because of privilege from elsewhere (examples for anyone could be a salaried job, stipends, familial wealth, race, class, gender intersections) the way they interact with the (art) world is different to marginalised approaches. The other question posed at the beginning of the session felt a bit crumbly too: How can we support adaptive reuse for culture towards sustainability?

Often the work artists do is seen as a luxury or a hobby at best, or ineffective and useless at worst, through the lenses of capitalism and some of the attitudes in the room at the event reflected this, which ultimately undermines the work we do. I have the words of a colleague ringing in my ears after recently publishing something on social media about their precariousness within the arts and what is valued and what is not. Izzy Finch wrote: “neoliberal thought [has] led us to a place in society where creativity and culture are not valued economically…the state perceives this sector as something that is not a serious priority worthy of investing in as it will not effectively contribute to capitalism.”

It made me think about how we, as artists and ‘space-users’ need the value of our work recognised, remunerated and supported financially in the same way ‘space-bureaucrats’ do. Attitudes towards artists probably need to change as well as having our work and time paid for. We need more investment in the communities we conjure and the spaces we create as I do think these things combined with a promise of (some kind of) permanence can cultivate valuable and meaningful civic pride. We also probably need to be empowered to build, acquire or make space as I think we’d do it really really well with our embedded experiences and knowledge.

But we also, as artists or space-users, need to stop doing things for free to avoid setting that as precedent, for our own sake and the sake of more marginalised arts workers who cannot afford to give their free time and free labour for free-ish space.

This then is less of a recap of the day, because I don’t really know how to condense all that information – a lot of it I didn’t understand – and more of a series of thoughts and feelings in response. It’s great to see success stories like Pop Recs and host events like this one there. I feel stupid admitting this but I wish I knew more developer-y language, or more of the logistics and I can’t tell if this is my responsibility to go seek out info and educate for myself or there should be more of a glossary to allow more artists / space-users / normal everyday people to get involved and build, acquire or make space with our experiences driving the process.