A pub with a social mission: introducing Szimpla in the Jewish District of Budapest 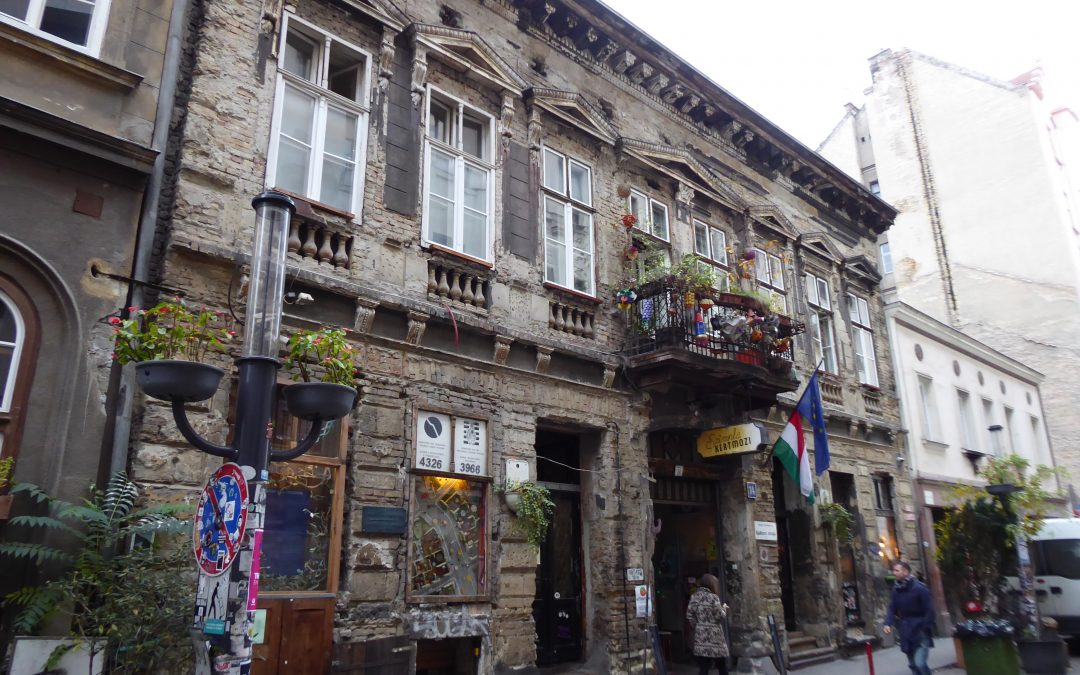 The so-called Jewish District is a historical neighborhood, UNESCO World Heritage zone in the center of Budapest. Recently it has also been known as the “Party District” or “Ruin Bar District,” the latter referring to a phenomenon that emerged around 2000: courtyards of dilapidated empty buildings were turned into pubs which also served as cultural venues. Ruin bars became very popular among locals and especially among tourists, and since the 2010s they grew into a mass phenomenon. This has led to significant changes in the economic, social, and cultural profile of the district. Parallel with this, the area emerged as an area with endangered heritage, as real developers and civic activists engaged in a fight about maintaining and refurbishing the buildings.

Many buildings are protected monuments now, and in 2002, the Jewish District was incorporated into the UNESCO World Heritage Site of Budapest. However, this did not solve the problems of how to preserve and manage this heritage in an economically and socially sustainable way; neither did it answer the question how heritage can contribute to the wellbeing of local residents who mostly experience the negative effects of the popular “Party District.”

Szimpla Kert in the Jewish district was one of the first ruin bars. It is located in a protected historical building, an urban house from the 19th century which was once combined with a stove factory. Szimpla has a clear vision about a livable urban environment where social diversity, inclusiveness, empowerment, and cultural heritage are respected and sustained. They actively seek partnerships among the local stakeholders: civic organizations, businesses, and the municipality. Though, paradoxically, they themselves have contributed to the emergence of the Party District, and the related problems and conflicts, their immense business success is a resource they can build on when working towards their vision in terms of urban environment.

You can read the entire story here

The district, however, which has been in the focus of investors’ interest for the last two decades, and has been struggling with the consequences of overtourism, must face a new challenge now. Due to the COVID19 pandemic, tourists suddenly disappeared, Airbnb apartments stand empty, and pubs are just resuming their operation now. While the movie presents the processes and challenges of adaptive heritage reuse right before the pandemic, it is a question of the future to what extent can/will everything get back to “normal” in the post-COVID era. New answers need to be found to how the adaptive reuse of historical buildings and sites can benefit the residents, visitors, and contribute to the maintenance of the heritage sites themselves in the district.