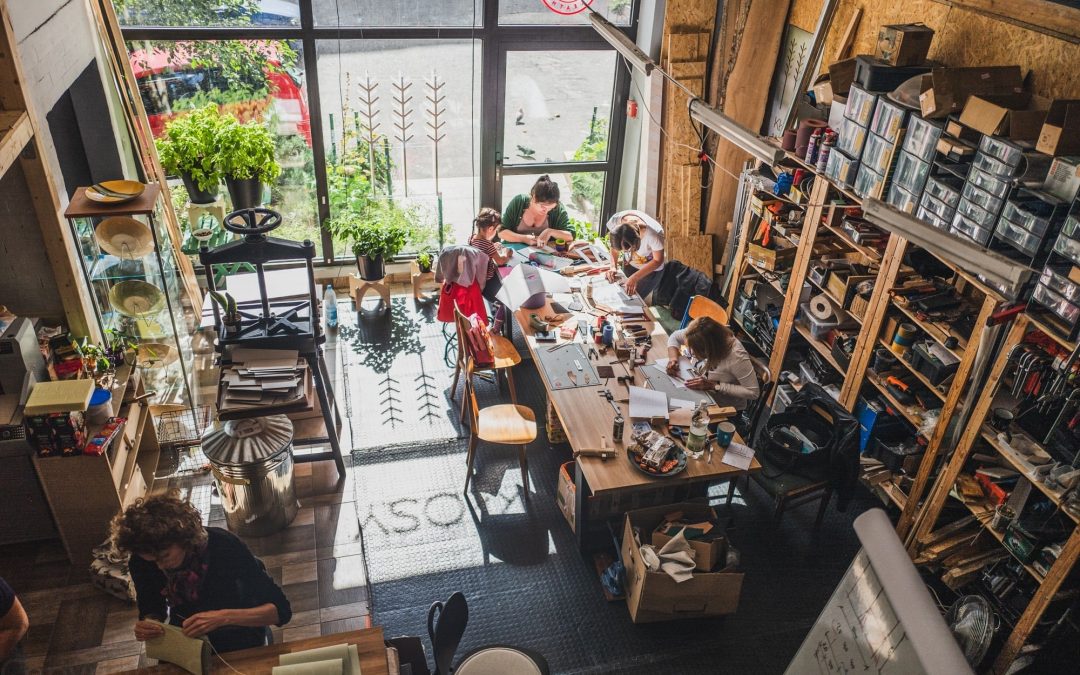 The economic and institutional transition in Poland brought about a number of changes. One of them was the decreasing role of manufacturing. Production, associated mainly with burdensome conditions for the people and the environment, was soon to be replaced by more attractive jobs in services and trade. Such perception of production, often associated with heavy industry, was a legacy of sorts from the old times. Poor situation of workers, i.e. those in large state-owned factories and mines, also led to the emergence of the Solidarność movement and, consequently, to a political change. Paradoxically, this shift did not result in an improvement of workers’ situation through better wages and working conditions or modernization of the factories. Instead, similar to the Western countries, Poland started to close manufacturing plants, while production moved to other continents. The former production sites were replaced by commercial, office and residential spaces. In the 1970s in Warsaw, the number of people employed in industry exceeded 200,000; in 2003, it was close to 100,000; today it is only about 70,000.

For some time now, the need to re-industrialize European cities has been present in public debates and in the political discourse. Strategies and policies are being developed at European and national level. Manufacturing is considered essential to the development of innovation and its removal from the value chain reduces competitive advantage. In 2014, the European Commission declared a need for an ‘Industrial Renaissance’ support for such initiatives as the Circular Economy Package or Industry 4.0. A strategy to support the re-industrialization up to the level of 20% of GDP in 2020 has been put forward. The European Commission sees modern manufacturing as innovative and bringing not only economic, but also communal and environmental value.

The time of Covid-19 pandemic has revealed vulnerability of the service sector and of commerce. It also brought topics hovering on the margin of the public debate right to the middle of it. Radical changes indispensable for climate adaptation have become more urgent but also more feasible, while our life has been undergoing other radical changes as well. The disruption of global flows of industrial goods from Asia raised the question of security of supply, sustainability and possibility of local production in the face of closed borders. Suddenly, a respirator, an FFP3 mask or a disinfectant liquid became an industrial product of necessity.

Not every type of manufacturing requires an urban ecosystem to thrive. However, urban functional areas are where the majority of people, potential employees, live. Urban manufacturing is a concept that draws our attention to the type of production that is needed by the city on one hand, while simultaneously in need of the city and what it offers – good communication, visibility, direct relations with clients, transparency. One of the key forms of urban manufacturing is modern and innovative craftsmanship, drawing both from centuries-old traditions as well as from the latest technological achievements. From the dawn of time, this type of work was associated with cities in a special way, bringing together craftspeople in numerous guilds. Today, a different type of connection and cooperation remains beneficial for this type of economic activity. Necessary innovation – organizational, technical and social – can also benefit from urban density and proximity, from the presence of various enterprises and R+D facilities. They should be part of a more sustainable consumption and use of the planet’s resources. Circular economy is the remedy for the crisis at hand.

The circular approach focuses on reducing the loss of value of the things we create. Craft as an activity requiring specific dynamics emphasizes the quality and individual character of things. Handicraft products are often extremely valuable and durable. However, even things that are valuable and permanent do not last forever. An ecosystem of creative and manufacturing crafts is supplemented by repair craftsmanship. Based on expertise, it helps maintain the value of things. There are individuals behind each and every production. It is them and their skill set that might make the heritage that surrounds us remain with us for many years, enriching the tangible culture of our cities.